Vancouver island is on the west coast of Canada. It is the largest island in a series that covers the coast of British Columbia from the 49th parallel to the border between the provinces and the territories.

The locals have divided the island in two categories there is the north island, and the south island. The dividing line is interpreted to be around the communities of Parksville and Qualicum Beach.

One of the fascinations with Vancouver island is the many different roads and various terrains that are perfect for motorcycle rides.

North island routes have less traffic compared to the south island. The South Island is where the major populations are ie Victoria, Metchosin, Langford, Duncan and Ladysmith.

On this specific Saturday we headed south early in the morning to avoid the traffic. Destination – chemainus, shawnigan lake, kilsole trestle and transfer beach in Ladysmith. .

There are some great little locations on the South Island. My preference is to leave early in the morning to avoid traffic. I hadn’t ridden the Shawnigan Lake route in over 10 years. Gorgeous road with minimal traffic. And the trestle as the end destination 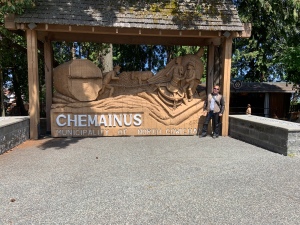 Gorgeous beach but a little too ‘peopley’ for me

Obviously someone had a sense of humour. I’m guessing it’s not the dog

Motorcycle and RV Travel and Adventure

The Blog of Travel

Motorbikes, dogs and a lot of traveling.

On Navigating the World, Life, and Finding Meaning in Everything // See, Touch, Feel, Taste.

One Canadian's Journey
Babes Ride Out

My journey across America

I ride, therefore I am